The History of Graffiti

In the mid to late ’60s, an “underground art movement” known as graffiti sprung up in Philadelphia, Pennsylvania.  Graffiti was mainly used by local street gangs to mark their territory and by political activists to make their statements known.  The two artists credited with the first acts of graffiti are Cornbread and Cool Earl.  Both wrote their names all over the city, gaining attention from not only the community but also the local press.

Shortly after, this use of “tag names” made it’s way to the Washington Heights section of New York.  One graffiti artist, TAKI 183, made his way into an article in the New York Times.  TAKI 183 was a “tag name” for his birth name, Demetrius, and 183 represented the street where he lived.  He was spotted for his frequent graffiti on the subways.

With this new form of expression, there were many people tagging empty walls and buildings.  In order to stand out, these graffiti artists created more unique tags.  They used script and calligraphic styles, added stars and other designs, and also used multiple colors.  Some designs were mostly for visual purposes, but others had meaning.  For example, STAY HIGH 149 was a famous tag name, making a joint he cross bar for his “H.”

Having to stand out some more, “Broadway” style graffiti, where letters would become block letters and leaning letters, and “Softie” letters, more commonly referred to as “Bubble Letters,” became the earliest form of pieces, rather then just tag names.  Soon after, arrows and curls were added and became the foundation for “Wild Style Lettering.” 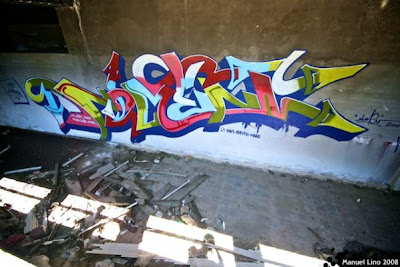 In the early 1970s, artists such as TRACY 168, CLIFF 159, and BLADE ONE, started creating murals with scenery and cartoon characters.

During the early to mid ‘80s, the number of graffiti artists dwindled, due to a few factors.  First, the cocaine drug trade led many firearms to be readily available, increasing tension on the streets.  Also, new laws restricted the sale of paint to minors and spray paint had to be locked in cages to make shoplifting more difficult.  Lastly, the government started making the penalties for graffiti more severe, which by the mid ‘80s, caused many graffiti artists to quit.